Finally – some snow.  We haven’t had snow since the weekend before Thanksgiving.  I sent the children out to celebrate. 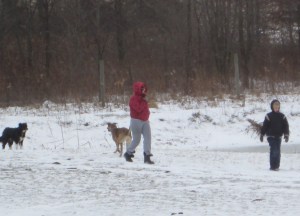 They were playing by what is slowly coming back as our pond after Joel drained it this summer.  Kurt thought he could brake the ice on the pond – not a chance at temps of -24 wind chill.  The four of them had a great time throwing ice and then wallowing in the snow closer to the house.

I’ve been working away on a couple of projects and I’ll give you a sneak peak of my filing cabinet makeover because the paint revealed something really cool on the cabinet.  BEFORE:  ugly old filing cabinet 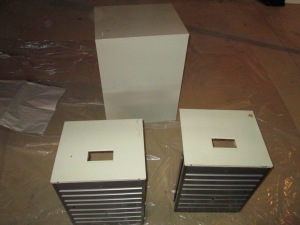 um, NO!!  Turns out the paint I already had would have been great on a bike (what it was bought for) but will NEVER be good in my mostly brown and black living room – can anyone say, “way TOO bright?”

Coolness revealed by the paint:

With all of the Spiderman chatter in the house in the last month I thought this webbing was really cool.  Apparently the original paint was in worse shape than I thought.  The snowflakes/spider webs didn’t show up with the primer, but the bright paint brought it out.

I bought a darker wine colored paint that has made the little cabinet much more appropriate for it’s future purpose.  It’s way too cold in the basement right now to play with Mod Podge, so the finishing touches will have to wait a week or so.

I’ve also got this project started and hope to finish it this week. 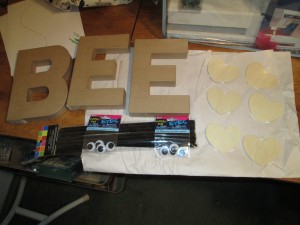 I haven’t taken mid-project pictures, but I’ll snap a couple before I proceed further than the paint.

After the BEEs I HAVE to tailor Kristen’s show shirt since the big, first show is next weekend!

I’m doing well on my projects for the year, but my goals are suffering.  I haven’t had coffee with Jesus more than once this year, I haven’t exercised a bit and I’m 8 days behind on the yearly Bible reading.  I have made 2 weeks of menus  though!  Hmmm, I suspect my priorities are out of whack, huh?  I’ll be working on that starting immediately.

And That’s What’s Happening on the Hobby Farm!